There’s something very special about this skater…read on to find out.

Monday night, while watching Meryl Davis and Charlie White take home a magisterial gold medal for the USA during Ice Dancing, all five male Addisonians ended up in a twitter conversation regarding how attractive the female halves of the pairs were. (Including Travis, heroically joining in from a stalled Megabus.) My own comment was that this relates to why I love figure skating, as mentioned in my earlier recaps: the particular meld of athleticism and aesthetic gracefulness. Female figure skaters in particular look like Gainsborough and Reynolds paintings come to life in their elegance, but more importantly, they have trained their bodies to do things hardly any of us are capable of doing. Quadruple jumps and spins on ice at incredible speeds on bodies that have less muscle? Call me astonished every time.

But no one will equal the grace of bronze medalists Elena Ilinykh and Nikita Katsalapov, so remarkable that MY MOTHER called to tell me to watch them. Not as technically brilliant as the competition, they conveyed so much emotion and poetry to make up for any deficiencies: many tweeters called it “a true dance on ice.”

END_OF_DOCUMENT_TOKEN_TO_BE_REPLACED

Bob Costas is back! He’s back, and a lot less pirate-looking!

Let's go in for that close up. pic.twitter.com/rQg3bYiftO

During Costas’ absence, Russia has taken the top spot in the medal count (if you count total medals — Germany currently has the most gold medals). Norway has been dethroned from the count, and if you believe the gents from Oslo, it’s partially because of a ski-wax conspiracy. This isn’t the only controversy that Costas has missed: some lugers are positive Russia turned up the temp on the sled track to give their sledder better odds; the Russians, for their part, are still protesting that disallowed hockey goal against the U.S. Men’s team.

We’ll come back to that, and all the other hockey goings-on. But first, WE CURL.

END_OF_DOCUMENT_TOKEN_TO_BE_REPLACED

Meredith Viera has taken over the hosting duties in the absence of Costas and Lauer, and while she looks the part of Winter Games host in an all-white ensemble. But she has almost no personality, delivering the results with standard charming morning-show monotone.

CHILLED TO THE MARROW: I am not stopping the skeleton puns for the follow-up to yesterday’s first part of the Women’s final.

END_OF_DOCUMENT_TOKEN_TO_BE_REPLACED

As one of only two single members of the now eight-strong staff, the plan is for me to join J. (and any others who decide to leap into the fray) to cover the Olympics on this Valentine’s Eve and Day  (I mean, what else am I going to do but help our group?) and again on Wednesday and Thursday. These days were not picked at random: they are the days of my favorite of all Winter Olympic events, maybe Olympic events, period: men’s and women’s figure skating.

Why do I love figure skating so? I think it’s a combination of my great admiration for people who can do things I cannot (if you’ve ever seen me on the ice rink, you would know the truth of this statement…plus I got into it when I was still overweight, and skaters are among the most superbly built athletic figures of them all) and my own personal aesthetic loves (this goes beyond beautiful women and men who, like William Holden in The Bridge on the River Kwai, I can appreciate…I’ve come to value good clothing design, and I love classical music, film scores, and Broadway music, so seeing people interpret this in a way even more daring and risky than most modern dancing…this involves wearing blades on your feet like frigging Lotte Lenya in From Russia With Love…is one of the heights of art for me. Art meets sports. Of course this was something I would be very into.)

END_OF_DOCUMENT_TOKEN_TO_BE_REPLACED

It’s day 6 of the Sochi Winter Olympics (or day 7, if you count the opening ceremony), and we have been reminded that Norway is very good at skiing. Also, there are a lot of Olympic medals for skiing events. By simple syllogistic reasoning, we can deduce that Norway has a lot of medals so far. And we’d be right. Well done, us. Gold star.

Here are the other things we’ve cared about over the first few days. YES, there are spoilers from this morning. I assume y’all were watching the Women’s USA-CAN hockey game, so nothing should be a surprise.

Hockey: Egads, the USA-CAN Women’s game was a contentious affair. The first two goals were scored on power plays, and the third goal went in after play was whistled dead. Technicalities. I could describe this game as two evenly-matched teams, where Canada’s savvy defense & transition play saved its bacon in the 3-2 win. Or I could sarcastically congratulate the refs on finally calling out Canada for too many players on the ice with less than a minute left. It would’ve been nice if they noticed things like that any time in the preceding 59+ minutes. Grumblecakes, say I.

END_OF_DOCUMENT_TOKEN_TO_BE_REPLACED

Kick off the Winter Olympics with the Addison Recorder! Andrew and -J. will live-blog the not-live Opening Ceremony from the comfort of a TV screen on the north side of Chicago. 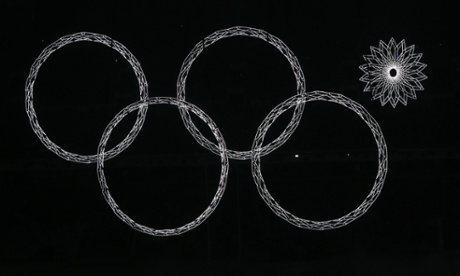 Is that an asterisk?

10:27 PM: Really, Lauer? NBC had done a great job of not whitewashing the external negatives that surround these Games. Well, not too much. Then you go and end it by pleading for folks to only talk about what we ‘should’ talk about at the Olympics? No, sorry Matt, you lost me. –J.

10:17 PM: ANDREW says — Maria Sharapova is one of the most accomplished torchbearers ever, although she’s not Muhammad Ali or the Tenth Doctor.

The final relay is a fine mix of different athletes representing all the different sports, including the gold medal gymnast who happens to be dating Putin. Two 1970s national heroes from figure and hockey are make the final run to the torch. There’s a youthfulness in their running, almost an Updike-Rabbit Angstrom quality, which is touching to see. The torch itself is a slimmed down Devil’s Tower, the “Pictures at an Exhibition” recall fits, and together they light the torch, and the most spectacular display of fireworks which thankfully do NOT blow up the roof cascade into…the Nutcracker. AND THE SNOWFLAKES WORK THIS TIME!

END_OF_DOCUMENT_TOKEN_TO_BE_REPLACED

Only one day until we begin our coverage of Sochi 2014! … To be honest, I might want to encase “coverage” and “Sochi” in a pair of scare quotes. As a small blog / zine / word jumble, the Recorder will not be actually present in Russia. We’ll be providing inexpert coverage from the glow of our TVs in various Chicago locales — when we’re not at our 9-5 jobs or sleeping, naturally. Luckily for our readers, I have acute insomnia, so I don’t sleep much.

Before we start the official coverage, though, we want to bring a lot of the background noise from these games into the foreground. There have been calls to boycott the Sochi Winter Games; before that were the calls to move the games to a different city. There’s many a good basis for these calls: corruption, expenditures, corrupt expenditures, ill-preparedness, security threats, regional instability, animal cruelty, and significant human rights concerns. Any one of these reasons ought to have given the IOC pause. Unfortunately, there was no such consideration. Not publicly, at least.

While the IOC and member nations haven’t boycotted these games, many individuals are. I can’t fault anyone for that, even though I worry such actions hurt the athletes more than the companies, politicians, and bureaucrats that might deserve the figurative pain. Over at SB Nation, they’ve suggested a way to both watch & support Olympic athletes while also supporting an organization opposed to Russia’s draconian anti-gay laws and culture. Check out the article, which also links to the bars in Chicago that will be remote Pride Houses for viewing the Opening Ceremonies.

But I’m getting ahead of myself. At the Addison Recorder, we are going to be talking a lot about the Olympics over the next few weeks. We’re sports nuts, pop culture geeks, and geographical nerds. We’re going to write a lot of words that will be excited, sincere, snarky, silly, insightful, and not-so-insightful. We’re not always going to mention the background events that have caused so much concern. So let’s make sure we set the stage and put them out front.

Because we are really, really worried about these Games.

END_OF_DOCUMENT_TOKEN_TO_BE_REPLACED

Hey, everybody! The Olympics are almost here! Let’s go to Sochi!

If you’re playing Ticket to Ride: Europe, the Olympics are over there on the right, part of that frustrating Erzurum-to-Moscow corridor.

Soon we will visit the shores of the Black Sea through the magic of digital broadcasts with more sponsors than a fleet of NASCAR drivers. We will marvel at the beauty of Sochi, only a few hundred miles from the terrifying bloodshed in Chechnya. Our hosts will be the generous country of Russia, a land that provided forced free government housing to outspoken punk rockers. It’s a country that totally, not at all, what are you talking about, doesn’t hate the gays. They swear.

(In all fairness, Russia has clarified that it’s newer laws aren’t anti-gay. They merely prefer that, when in public, everyone pretends that homosexuals don’t exist. And anyone who breaks this illusion is summarily escorted to prison. There’s a difference, I’m told.)

… Sorry, I went on a digression there. Ahem. Anyway, let’s talk about the Olympics, where it’s all about peace, love, and Slim Jims.

END_OF_DOCUMENT_TOKEN_TO_BE_REPLACED

Ten days in, one week to go, and the Summer Olympics in London have been… Well, they’ve been the Olympics.

Depending who you are, that statement will mean different things:

So far, the Olympics have done everything possible to fulfill those pre-conceived notions, and many others. Personally, I fall on the positive side of those notions. I mean, you could weigh very similar platitudes and criticisms against NCAA football – the only difference being that I don’t really care about NCAA football.

Which is why I am about to attempt an entry in the Addison Recorder’s diary of the Olympics. I will try to cover angles that haven’t been plastered across magazines, blogs, and websites by hundreds of others. Some people might call it a Quixotic attempt, and those are the people who probably own the same thesaurus that I do.
END_OF_DOCUMENT_TOKEN_TO_BE_REPLACED

I am writing these sentences just ten minutes or so before the commencement of the 2012 Summer Olympics Opening Ceremonies. This is the second event the Addison Recorder has deemed worthy of keeping a running diary during. Like the first, it has a lot to do with sports…indeed, the Olympics are in my mind the epitome of sports, the greatest athletes in the world competing for national pride and the chance to break some records. But the Opening Ceremonies in particular are a mixture of athleticism and culture, a chance for the host nation to revel in their heritage and promote it for the world.

And after that high-minded introduction, inspired by my own lifelong love of the Olympics, so much that I’ve read reference books about the games cover to cover, I will promise to be irreverent and biting about the Ceremonies.

England has not hosted the Olympics since 1948, when Clement Attlee was pulling the U.K. out of its wartime haze. Now, in 2012, London is arguably the soundest world financial capital, England’s moving along pretty darn well compared to us, and their aesthetic standards since the war guarantees an event like no other. Oscar-winner Danny Boyle has put together the show. Knowing and loving Boyle’s films…this could go many ways. What if he draws some ideas from his own work? Giant, flashy, A.R. Rahman-style dance numbers and whimsical interactions between children and supernatural figures? I’m game! Heroin-addled hallucinations and men cutting off their own arms? Not so much. Zombies? Maybe.