Bob Costas is back! He’s back, and a lot less pirate-looking!

Let's go in for that close up. pic.twitter.com/rQg3bYiftO

During Costas’ absence, Russia has taken the top spot in the medal count (if you count total medals — Germany currently has the most gold medals). Norway has been dethroned from the count, and if you believe the gents from Oslo, it’s partially because of a ski-wax conspiracy. This isn’t the only controversy that Costas has missed: some lugers are positive Russia turned up the temp on the sled track to give their sledder better odds; the Russians, for their part, are still protesting that disallowed hockey goal against the U.S. Men’s team.

We’ll come back to that, and all the other hockey goings-on. But first, WE CURL.

I’m looking forward to some serious curling when the semifinals start this week. In both Men’s and Women’s competition, Canada and Sweden own the top two records. On the Women’s side, the Canadian team under Jennifer Jones is simply dominant. Shooting 86% as a team, the Jones rink has scored 32 more points than it’s given up. Oh, yeah, and they’re undefeated.

One loss below them is the also-dominant Swedish team helmed by Margaretha Sigfridsson. Perennial silver-medalists at World Championships, Sigfridsson will face a semifinal match against the veteran Swiss team skipped by Mirjam Ott. Ott has a couple Olympic silvers under her belt along with a recent gold at Worlds. In the other semifinal, Canada will face off against an inconsistent team of Eve Muirhead & her Scots (erm, I mean Great Britain). Muirhead fell to the 4th spot after losing to Denmark in the last game; her team has also lost to all the other semi-finalists during prelims.

Canada takes a backseat to Sweden in the Men’s event. The Swedish rink lead by Niklas Edin has only one loss, a surprising scuff against mid-level Denmark. . Sweden will face the Scots (GBR), lead by David Murdoch, Murdoch made a RIDICULOUS shot in the 10th end to score 2, narrowly defeating Norway in a tie-breaker game that was an instant classic. Canadian skip Brad Jacobs, meanwhile, has recovered from a shaky start to these games to post an impressive 7-2 record. His team faces Liu Rui and China, who also finished 7-2. Canada barely won their prelim match against China on Sunday, and only after China forced extra ends.

Hold on, I’m going to need a drink for this part of the recap.

(pours himself a healthy dram of bourbon)

Okay, let’s do this.

I was up late Sunday night, watching the last U.S. Women’s game. Erika Brown’s team had a rough Olympics and came into their final game with only one win. Their losses ranged from a near-victory against undefeated Canada to an embarrassing 12-3 drubbing at the hands of the Scots (Great Britain). As a fan of U.S. curling, I’d hoped that this last match could be a redemption for Brown’s rink. Their opponent (South Korea) was decent but beatable, and I was crossing my fingers that the deadshot abilities Brown displayed in previous years would make a rare Sochi appearance.

Instead, Brown gave up 4 points in the first end. Korea piled on, 2-point end after 2-point end. After the U.S. barely eked out its second point in the 6th end, announcers assumed that Brown would shake hands and forfeit the remainder of the match. She didn’t, seemingly hoping against hope that maybe her team could put together a few final brilliant ends before their Games were over. … The lackluster 7th was not the brilliant hoped-for end. Korea scored 2 again, and staring at another 9-point deficit, Erika Brown and her team shook hands with the Korean team. They forfeited the remaining ends, bowing out of the Sochi Olympics on a depressing 11-2 defeat, their 8th loss in the tournament.

It wasn’t much better for the men. U.S. skip John Shuster finished with a 2-7 record, including a few frustrating matches that they should’ve won. Take, for instance, their game against Russia: the teams were tied in the 10th & final end. Team USA had the hammer, giving them a significant advantage. As long as they could keep a clean house, the last rock could give Shuster a much-needed win. That’s not how things went down.

Look, both U.S. teams were outside shots at medals, at best. But they still figured to be better than last and second-last in these games. Almost every match saw the U.S. team scrambling to catch up to their opponents’ strategy, or shooting themselves in the foot, or missing a critical point by millimeters. Maybe it’s a symptom of U.S. strategy; it felt like they set up a lot of risky situations where they were fine — as long as their opponents didn’t nail an amazing & difficult shot. Against other U.S. opponents, I’d think this would be a fine strategy. Against the best in the world, our opponents consistently made those shots, leaving Teams USA few options but to attempt difficult shots for minimal payoff.

It’s frustrating for U.S. curling fans to watch our teams regularly bottom out on the Olympic stage. I need something to cheer me up. Something like… puppies.

Oh my glob, look who I just found! 🙂 #sochistrays pic.twitter.com/ne66y7jN6Z

A couple of high-profile U.S. athletes are trying help out in their own small (and far more humane) way. Slopestyle skier Gus Kenworthy is working to bring home a pack of Sochi strays, and snowboarder Lindsey Jacobellis has her own stray she’s looking to bring back to the States. The competitors from the “X Games” events have also been good for the U.S. medal count: Kenworthy was part of a 1-2-3 sweep of the Men’s Ski Slopestyle event. Yahoo’s Jeff Passan even went so far to point out that, if it were not for the “extreme” sports invented in North America, the U.S. medal count would be rather abysmal.

One of the reasons that U.S. medal count would be abysmal? We’re getting shellacked in the speedskating events. You expect the Netherlands to bring home a lot of hardware in these races, but it’s not just the Dutch who are beating Team USA. Everybody is beating Team USA. It’s gotten so bad that the super-double-secret-high-tech racing suits designed by Under Armour & Lockheed Martin have been ditched. Before the games, sportswriters were asking if these would be the fastest suits ever. Now, they’ve become a symbol of proprietary paranoia gone wrong — and the perfect scapegoat for why some of the best skaters are barely even making the top ten.

Speaking of the Netherlands, NBC provided a brief geography lesson during a speedskating over the weekend. Noting that most folks use “Holland” and “Netherlands” interchangeably, NBC taught us that Holland is actually a province within the country of the Netherlands. (Technically, the provinces are North and South Holland.) I love geography and maps, and the Olympics are a great excuse to be a geographical geek. Take, for example, the region between Poland and Russia. How many U.S. folks could name the countries in a region that spent many decades behind the Iron Curtain? Well, Ukraine shouldn’t be too hard; that’s where Chernobyl is located. Ukraine got the raw end of that deal: Russia gave them nuclear fallout and political bullying (and attempted assassination), Ukraine gave them its top winter athletes.

But north of Ukraine? That would be “White Russia,” a.k.a. Belarus. The Belarussians have made a lot of noise in the Aerials and Biathlon competitions, so far winning a total of five gold medals (+ one bronze) in those events. (Side note: If you go east of Belarus, you’ll find the Russian exclave of Kaliningrad Oblast. #nerd)

Heading north from Belarus, you’ll come across the “Baltic States” of Lithuania, Latvia, and Estonia. Centuries ago, Christian Europe made sport of calling Crusades against the dirty pagans in these areas. The Europeans didn’t always call them “Crusades,” but the word today is pretty good shorthand for violence, militarily-enforced religious conversion, or outright genocide.

Sorry, got distracted by history there. The Baltic State of Latvia actually brings us to our next event recap, since all three of its medals so far have come from the sledding track.

I realize that subhead is a bit juvenile, but I have been losing a lot of sleep trying to catch live events. Which is why I will now also move to a list format for the sleigh events.

"IS THIS BMW DESIGNED SLED THE ULTIMATE SLIDING MACHINE?!?!"
I love Olympics commentary.

And now, we move to… 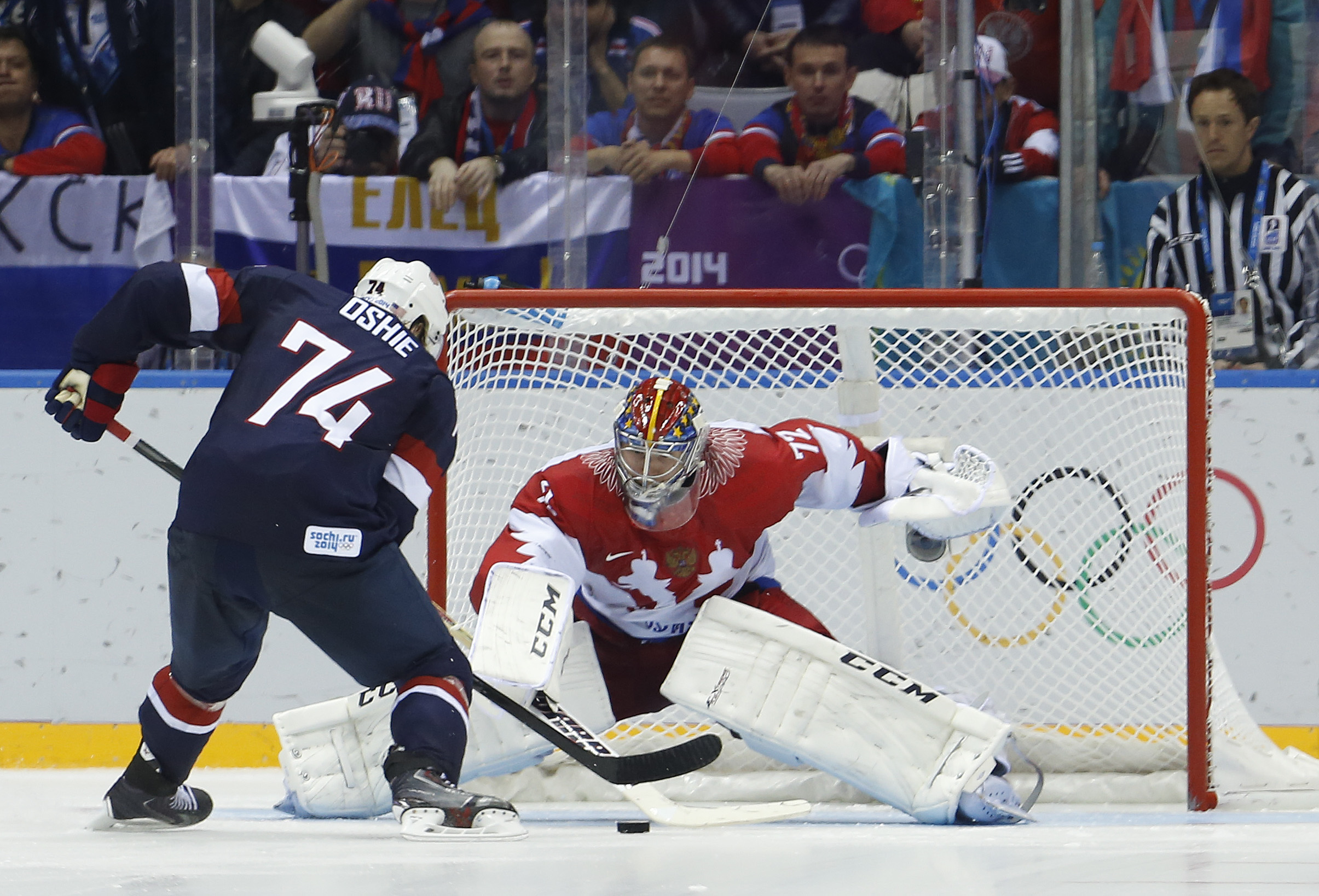 At this point, I fully expect that you’ve seen the USA-Russia Men’s hockey game. I fully assume that you know everything about T.J. Oshie, and have an opinion of his inclusion over Brandon Saad or Kyle Okposo. I also hope you’re aware that some Russians are still REALLY PISSED about that disallowed goal. If none of these apply to you, I am saddened. You should really look into all of that.

So let’s move behind that and look to the future. In Men’s hockey, only five of the twelve teams were considered serious medal contenders: Sweden, USA, Canada, Finland, and Russia. After group play, that’s the ranked order of the teams heading into the playoffs. This provides some really intriguing considerations:

The top 4 teams get to sit out the first round. This leaves Russia on the outside looking in. They should have no problem knocking off bottom-dwelling Norway, but it also means they’ll have to play an extra game, possibly leaving them fatigued as they progress.

In the Women’s rink, the playoffs proceeded as predicted. USA and Canada made short work of Sweden and Switzerland, and the two powerhouses from North America will face off for the gold. Canada won the prelim game, but it was a close-run thing. Thursday morning is when we find out who wins this round of the rivalry. It ought to be awesome.

I’m having a good time watching the Olympics. The athletes are having a good time. Much of the early criticism has been muted — thankfully, though, not all of it. Let’s not forget that Sochi was, in hindsight (and foresight), a terrible choice for winter games. It has been warmer than southern California or Florida at times, leading athletes to wear some un-wintry uniforms. The temps have wreaked havoc with outdoor events that really need snow. The organizers were at risk of canceling events, if not for the timely and breathtaking acquisition of a shit-ton of ice. Even then, they still have to deal with fog-based event postponements, which they fight with giant fans.

Though the hilariously disconcerting stories of unfinished buildings have faded, folks are still asking questions. The IOC has finally started to (unconvincingly) respond. And when the cameras and athletes are gone, will the Olympic village be exposed as a Potemkin village? Honestly, I’m not sure we’ll know or pay attention, especially if Putin can arrange it. And how many more activists will be detained once the eyes of the world have moved on?