Only one day until we begin our coverage of Sochi 2014! … To be honest, I might want to encase “coverage” and “Sochi” in a pair of scare quotes. As a small blog / zine / word jumble, the Recorder will not be actually present in Russia. We’ll be providing inexpert coverage from the glow of our TVs in various Chicago locales — when we’re not at our 9-5 jobs or sleeping, naturally. Luckily for our readers, I have acute insomnia, so I don’t sleep much.

Before we start the official coverage, though, we want to bring a lot of the background noise from these games into the foreground. There have been calls to boycott the Sochi Winter Games; before that were the calls to move the games to a different city. There’s many a good basis for these calls: corruption, expenditures, corrupt expenditures, ill-preparedness, security threats, regional instability, animal cruelty, and significant human rights concerns. Any one of these reasons ought to have given the IOC pause. Unfortunately, there was no such consideration. Not publicly, at least.

While the IOC and member nations haven’t boycotted these games, many individuals are. I can’t fault anyone for that, even though I worry such actions hurt the athletes more than the companies, politicians, and bureaucrats that might deserve the figurative pain. Over at SB Nation, they’ve suggested a way to both watch & support Olympic athletes while also supporting an organization opposed to Russia’s draconian anti-gay laws and culture. Check out the article, which also links to the bars in Chicago that will be remote Pride Houses for viewing the Opening Ceremonies.

But I’m getting ahead of myself. At the Addison Recorder, we are going to be talking a lot about the Olympics over the next few weeks. We’re sports nuts, pop culture geeks, and geographical nerds. We’re going to write a lot of words that will be excited, sincere, snarky, silly, insightful, and not-so-insightful. We’re not always going to mention the background events that have caused so much concern. So let’s make sure we set the stage and put them out front.

Because we are really, really worried about these Games.

I don’t mean that in a sarcastic or condescending manner. There are people from all over the world, from all different cultures, lifestyles, and practices gathering in a resort city whose Olympic infrastructure is unfinished. In addition to the standard culture shock and the missing infrastructure, Sochi is little more than 400 miles from Chechnya. That’s a road trip from Chicago to Minneapolis-St. Paul. Sochi is also only 23 miles from the border of Abkhazia, an autonomous state that’s in the middle of Georgian-Chechen-Russian tensions. 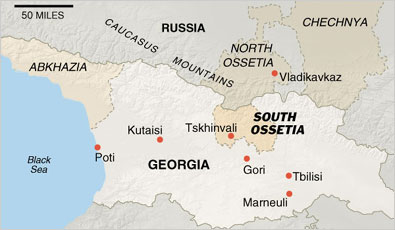 Today’s geography tips: Sochi is just off the upper-left side of this map. The highlighted regions have insurgency movements. You will not find the city of Atlanta anywhere on this map.

To top it all off, there’s the recent anti-gay laws passed by the Russian government, an official codification of a culture that can violently try to hide displays homosexuality. Added to that is the Russian government’s preponderance for arresting folks for even the flimsiest of pretenses. (See also: Pussy Riot, Yevgeny Vitishko)

That’s a lot of varied and worrisome shit, all meeting up on the shores of the Black Sea. If fate is kind, none of this will develop into a perfect shitstorm, and all of this will remain in the background. But while we’re giddily discussing who missed his quad salchow, we shouldn’t forget that the stuff below still exists.

I’d like to tell you all a story. It may be an apocryphal story, but it seems apt for this discussion. A couple hundred years ago, a bit to the north and west of Sochi, Russian Empress Catherine the Great decided to take a leisurely cruise down the Dnieper River. Years earlier, her armies and advisors had secured new lands all the way down the river to the Black Sea, in what is now Ukraine.

As one might expect, battle and poltical upheaval tend to reduce the aesthetic value of the property involved. Catherine’s trusted governor of the region, Grigory Potemkin, was freaking out. The villages and towns along the river were still in shambles, the infrastructure of the region utterly shot. Potemkin’s solution is familiar to anyone who’s watched Blazing Saddles: he would put up fake facades in a village, and clean it up before the Empress arrived on her boat. When Catherine’s tour floated by, it appeared that a town was flourishing, and the Empress would move on down the river.

After her departure, Potemkin’s men would disassemble the facades, and move it all to the next village on the river. Lather, rinse, repeat. In this way, Potemkin was able to fool Catherine into thinking that the infrastructure of this region was in great shape.

The veracity of this story is very much up for debate, but the story of “Potemkin villages” is still part of the contemporary lexicon. Which is why one would think that Sochi organizers would’ve put a little more effort into getting that facade up and in place before the media started to arrive. 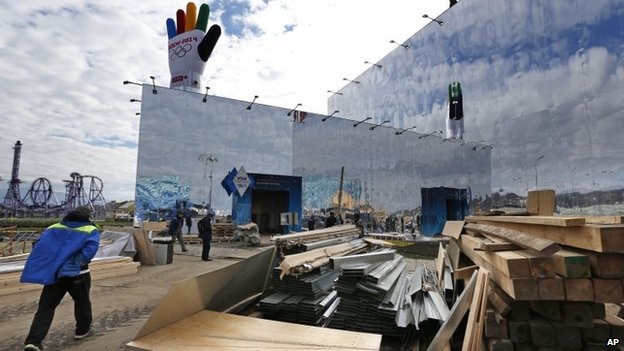 “What, that? Raw building materials laying around are part of the natural beauty of the Caucasus region.”

I’m not talking about the cultural differences, like throwing used toilet paper into a bin instead of flushing it. I’m not talking about millionaire hockey players having to share a tiny dorm room. I’m talking about basic infrastructure that only needs to hold up for a few weeks before the Olympics becomes a hazy bit of nostalgia. We’re all going to be distracted by the shiny Olympic competition, so it doesn’t even have to stand up to prolonged scrutiny.

But when you have unfinished hotels without lobbies? When you have hotel water that seems more dangerous what’s coming out of West Virginia taps lately? When you have a building that has no exterior — just a tarp painted to look like a building’s exterior — you’ve got a serious problem. I get that Olympic hosts routinely over-promise, and scramble at the last second to complete everything. But in the course of writing this preview, Deadspin has already put up a new post “Potemkin Toilet Discovered in Sochi.” When a host spends a reported $51 billion to prepare for the Winter Olympics, we expect that the waste and corruption will at least look pretty. And the doorknobs & toilets might function.

Instead, we have open manhole covers, unfinished buildings, piles of sod outside venues, and Shaun White pulling out of an event for reasons of personal safety. The last Winter Olympiad had a similar issue — a fatality on the luge track. But there’s a difference between a difficult luge track made potentially too difficult, and a new slopestyle setup that has caused three athletes to pull out of the event due to injury days before its premiere.

One other difference between this Winter Games and last: Vancouver didn’t have canine kill squads.

See, Sochi has a massive stray dog population. It’s a huge problem, both for the dogs and the people attending the Games. Instead of taking care of this for the last few years through humane means, Sochi kept putting it off. Now, that the deadline is here, Sochi’s solution is to round up and kill stray dogs, while pretending that it’s totally not killing stray animals.

Amidst the threat of dog bites and contaminated water is an even bigger worry. If you’re a fan of geography like me, you’re familiar with the Caucasus region. It’s a fascinating stretch of land bordered by major seas to the east & west (Black and Caspian, respectively), by Russia to the north, and by Turkey & Iran to the south. It’s also home to a very, very wide variety of cultures, ethnicities, and religions. Oh, and there’s a huge supply of natural gas in the region.

Care to wager on the stability of this area?

Remember back in the U.S. presidential election in 2008? When candidate John McCain attempted to prove his foreign policy bona fides by proclaiming, “we are all Georgians” — that was in reference to the Five-Day War between Russia and Georgia. While the conflict started in the Georgian province of South Ossetia, it also spread to the break-away Georgian province of Abkhazia. The province of Abkhazia is less than a half-hour drive from Sochi.

If you continue along the Russian-Georgian border, after you pass South Ossetia, you’ll come across the provinces of Ingushetia, Chechnya, and Dagestan. The FBI has issued a travel alert for this region for these Games. Some NHL players participating in the Olympics are telling their families to stay home. How do you overcome the combination of poor Olympic infrastructure with regional instability?

Well, there’s always the option of ensuring your government is significantly oppressive.

Herein lies the biggest motivation behind the 2014 Olympic boycott movement, and with good reason. Article 6.21, as passed by Russia’s legislative body, makes it a criminal act to give a minor the impression that “nontraditional” relationships might be anything other than an inhuman abomination. More or less. As this response from last summer points out, the Article is both vague and ill-defined. This is intentional. The more ambiguous the law, the easier it is to abuse.

This is why Russia hides behind the bullshit excuse of “protecting the kids.” The law is in violation of the Russian constitution, as well as the European Convention on Human Rights. It implicitly codifies and excuses the violence against members of the Russian LGBT community, as detailed in a recent in-depth feature from GQ magazine. And when the international community called out Russia, and called on the IOC to do something about it, all we got was re-heated bullshit. Russia hid behind the fig leaf of “protecting the children;” from behind their fat stacks of cash and sponsors, the IOC gave its thumbs-up.

It’s not like the Russian government would ever abuse ambiguous law to punish critics, right? We could ask that of the  members of Pussy Riot, who spent two years in the purgatory of Russia’s justice system. In this case, the law was again a fig leaf: Putin declared that their disrespect of a church venue was criminal, because worship needed to be protected after what happened under Stalin.

The irony there is that Putin was following Stalin’s example of how to silence critics under false legal pretenses. Read the biography of Osip Mandelstam some time; punishing dissent through the courts is a long-standing tradition.

That’s a lot of toxic sludge boiling underneath the veneer of the Olympic Games. As I said, there’s ample reason for boycotting. Personally, I’ve never had faith in this sort of boycott. Nations have boycotted Olympics in the past, to no effect other than robbing athletes of the opportunity to compete for their country. On the other hand, the images from the 1936 and 1968 Olympics have become inspirational and iconic. The 1995 rugby World Cup final is an example of how sport can be used to bridge cultural gaps.

I don’t know that anything of this sort will happen in Sochi. I would lay money that it won’t. But the Recorder will be here, covering the achievements of the athletes despite the stains that Russia and the IOC keep leaving on the Games.