Welcome back for the latter half of Alex and -J. making predictions which they will not be held accountable for later on. We hope you grabbed your favorite libation, as our evaluations make a lot more sense with a bit of alcohol in your system and a lot of sundry trivia bouncing around your brain.

(If you missed the analysis of Groups A-D, you can find them here.)

Alex: France has alternated between phenomenal and craptastic over the past four World Cups. Since it’s already been eight years since they lost to Italy in the 2006 Final, that means it’s time to sing La Marseillaise again. Which I’m down with, because that’s the best damn national anthem in the world.

Vive la France! Who will be carrying the baguettes for Équipe de France de football, J.?

-J.: I’m not sold on the French, though I’m not sold against them, either. I am a French equivocator. Switzerland seems like a great team every World Cup, but never “semifinals” sort of great. Ecuador is in South America, a thing whose imporance in 2014 I’ve mentioned repeatedly. Honduras is a CONCACAF stalwart that feels like it ought to maybe be some kind of dark horse if another team in this group implodes, so… Hrm. How about I go with one team from Europe and one team from the Americas to make it into the next round. Will that work?

Group F: Argentina & Some Other Things

Alex: Stop reading this. Go read Wright Thompson’s amazing piece about the lingering psychological and cultural impact of 1978, the year in which Argentina won the World Cup on their home soil while torturing and killing political prisoners mere blocks away from the final match. It’s as haunting an article as I have ever read. Back yet? Cool. Argentina will win the group, and I think they’ll be joined by the Bosnians. J. will jump in once you have stopped crying and/or shaking with anger from that article.

-J.: Well, I was going to mention something about Argentina slaughtering this group of cupcake opponents, but that seems rather inappropriate now, doesn’t it? Looking at my notes, I also picked Bosnia & Herzegovina, which also seems to conjure up a juxtaposition of international competition & human suffering. Honestly, none of these picks seem free of suffering. And the next group after this one is the second “Group of Death”? That seems unfortunate.

Alex: Fuck you, Sepp Blatter. It’s impossible to prove, but this just feels like FIFA giving the USMNT the worst group draw possible. Our eternal nemesis Ghana, the country that booted us in both 2006 and 2010, is our first game. Then we play Portugal, with the unstoppable Cristiano Ronaldo facing our unsettled fullbacks. Finally, we play the always-intimidating Germany, with our manager Jurgen Klinsmann looking across the pitch at his native countrymen. I… want to predict the U.S. advancing, because jingoism is the best, but…jeebus.

-J.: Fuck. These are all teams you’d expect to see in the knockout stage, and half of them won’t make it there this year. I’m going to say that Team USA makes it in as the #2 team in this group because:

Who’ll win this group? Germany is way too deep to be hampered by an injury or three. . (Update: Looks like Ronaldo is no longer injured… I still stand by my USA pick. We’ll do it. Somehow. Maybe.) 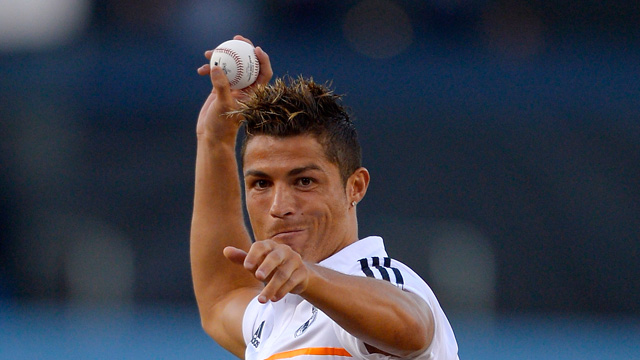 All we have to do is get him to use his hands. This plan is foolproof!

Ghana is a spoiler more than a group winner. But let’s all simply agree that this group will likely be a giant clusterfuck.

Group H: Fading Out at the End

Alex: sdkjvbdSkjvbSv V,bs<HvbSHvbksvkhdsvkbkvhb FUCK YOU, SEPP BLATTER! I know, Belgium would still be the favorite if the U.S. were in this group, but advancing to the knockout stages would be so much easier if were were playing Russia and Algeria. <grumbles for days> Anyway… Belgium will win the group and Algeria seems like it can’t possibly advance. Who do you pick from here, J.?

-J.: Russia will attempt to plant subversive agents within other teams to derail them, only to fail when other teams realize these agents are still wearing Russian kits (but with the team insignias removed). Putin, however will suddenly realize that Sepp Blatter is a dictator as ruthless and tone-deaf as Vladimir himself. The world then enters the Dark Times; survivors of the epoch will tell stories of how their great-great-grandparents survived the amalgamated horror and corruption of a joint Russo-FIFA bloc.

Um… that is to say, Belgium wins the group because they make some damned fine beer. Algeria is my #2, because why not? This group is the World Cup’s “easy” setting, and Algeria has some skill. Korea is always a dark horse, especially in a group like this. But Russia does not advance, and only because I’m not objective. If one of their players stands up to denounce Putin and recites the anti-despotic poetry of Mandelstam or Akhmatova, then maybe I’ll pick them to move on to the knockout stage. Otherwise, they’ll be booted from this group like their leader was booted from the G8.

Well, go forth and place bets on them with your life savings, assuming you want to be free from your ties to financial security. But the conversation can continue in the comments section, where we expect stories of ill-placed wagers.