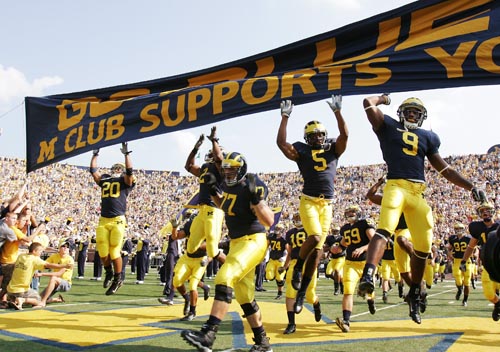 As you may recall, one of my first articles on the Recorder decried baseball as a profoundly boring sport played during the interminable period of boredom that is summer. Happily, summer is all but over. Classes have begun, the weather is cooling, and that most essential of American sports returns this week. Having defended its virtues in my previous article, I feel no need to make a case for football, especially college football, as the most entertaining, strategic, and exciting of the major games. Instead, I want to discuss some of the wonders and curiosities that are peculiar to this grand game.

On a very basic level, the pleasures of college football are very simple and tied into the season that hosts the game. The game kicks off at the tail end of summer, with the first few weeks of games played comfortably under clear cerulean skies. Up here in the Midwest, the first sharp crack of cool air and blustery weather means that the conference games have begun. Rivalries that stretch back over a century are fought once again as jackets and hats are pulled out of closets and Oktoberfest beers are toasted in victorious satisfaction.  When the calendar turns to November the crowds bundle under winter jackets and heavy scarves as the most bitter of enemies face off on freezing fields underneath slate grey skies. The bowl games around Christmas and New Year’s are played mostly in warm locales, a last tantalizing glimpse of fun before winter finally wipes out all warmth and the football season ends. It’s no accident that the four months that correspond with the football season are my favorite time of the year, but I’ve been an old man since I was 15. No one should be surprised that I revel in the season of decay and passing, and celebrate its sport above all others. It’s a wonderful time that I pine for constantly during the off-season.

But college football has selling point that go well beyond its weather. In a recent article counting down the days til the college season kicks off Every Day Should Be Saturday’s grandmaster Spencer Hall touched upon the grand tour that is an autumn Saturday spent watching football. “…the eyeball bounces effortlessly to some of the strangest, otherwise random selection of places: Blacksburg, then maybe Ann Arbor followed by Clemson, then moving with the sun through Baton Rouge, Manhattan, Iowa City, Austin, and on through the Rockies through Boulder, Provo, Salt Lake, and Tempe before running into the sun setting on Los Angeles, Eugene, and the lights of Wazzu and Washington shining through the permadrizzle of the Northwest.”

This insight inspired some thought in me, as I am a man who loves the breadth of our nation and the variety of cultures and sights within it. Professional sports rarely leave the large metropolises that dot our country, drawn as they must be the epicenters of population and wealth that can pay for all those exorbitant salaries.  College football is not without its exorbitant salaries (more on that later), but its base only rarely resides within a metroplex. Instead, we see crowds of 80,000 plus in smaller locales like Morgantown, Tuscaloosa, or Lincoln. In this regard, collegiate sports, despite the influx of unseemly amounts of money and advertising here in the 21st century, still reflects aspects of our land in the 19th century. We effectively travel back to when these land-grant institutions were founded, seeing why the citizens of a state chose to set up their highest institutions of learning in this town or that one.  A town like Ames may not have much to draw the world’s attention, but when millions are watching Iowa State face knock off some highly-ranked foe it becomes a cauldron for all Iowans’ pride and glory. (Charles Pierce wrote an article for Grantland the other day that dives even further into the relationship between land-grant universities and their home states that is well-worth a read)

That localized pride is another unique and wonderful feature of the college game. It may be silly, but when I watch a Michigan Wolverines football game, I feel a tangible sense of pride in my homestate and its flagship university. It doesn’t matter that I no longer live in the state and never went to the school, Michigan’s football team has become a symbol of all that I find good and endearing about where I came from. Much to the chagrin of its conference-mates, Michigan has always styled itself as an institution apart from the rest. Every public face of the school, from the football team, to the academic rigor, to the city of Ann Arbor, proclaims a entitled sense that the UM way is the best. More than anywhere else in the Great Lakes State, the University of Michigan reflects the self-righteous Yankee heritage of the Upper Midwest. As a self-righteous Yankee from the Upper Midwest who loves him some college football, it only makes sense that I would make the fortunes of the Wolverines into an essential part of my character.

The same holds true for other schools and states or regions across the country, as each team and institution seems to take on the character of the people it is representing. The furiously talented but only sometimes properly utilized Miami Hurricanes emanate all the glimmering allure and lurking danger of their hometown. The Southern California Trojans, with their golden-haired quarterbacks and beautifully finessed passing game, are a perfect symbol for the natural ease with which the Los Angeles area dictates to the world what is and is not cool. The Alabama Crimson Tide, overloaded with immensely gifted athletes and run with dictatorial precision by Nick Saban, encapsulate the win at all costs mentality of a state that is completely mad for college football. It’s the same all over, and in a much more profound and direct way than with most professional teams. On some level, these teams represent our civic institutions and democratic ideals, acting as avatars for an entire population.

Of course, that idea runs both ways. Our civic institutions and democratic ideals have always been the playthings of interlopers, swindlers, and misguided ideologues, so it only stands to reason that college football would suffer from many of the same faults. As I alluded to earlier, college football is not a pristine or transparent affair, despite my ascribing to it many of the ideals that I associate with the country’s better nature. In fact, college football is in the midst of a frenzied period of change and upheaval being driven by an incredible influx of money. The broadcast of a seemingly endless amount college football games by ESPN and its affiliates in the past several decades has made the sport into an enterprise worth billions. Despite this, none of the players that fly around the field and risk their bodies on any given Saturday are paid. The NCAA, a cartel run by the most powerful universities despite its posturing as a quasi-governmental body, adheres to standards of amateurism that are all but extinct in the rest of the sporting world. So the student-athletes (the NCAA’s ingeniously disingenuous term) are given scholarships and small stipends and told to live up to an Olympic ideal that even the Olympics has abandoned. 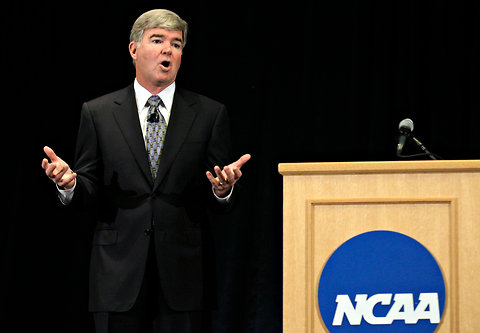 Last summer writing in The Atlantic, Taylor Branch compared this cycle of non-compensation to the plantation system that dominated the South for centuries, and I think the comparison is apt. At the bottom of the rung are the players, thousands of young men who devote their entire lives for some schooling and a vanishingly small chance at becoming a pro. Many more wind up with lifelong health problems than 9-figure contracts, despite the unknowable amount of money that swirls through the sport via ESPN and wealthy boosters. That money has to go somewhere since the players aren’t allowed to collect what they have earned, so we have seen a steady inflation of coaching salaries and infrastructure investments. This results in the aforementioned Nick Saban of Alabama earning $5.9 million per season. It’s a staggering figure before even considering that he earned this for coaching the football team in a state where the annual per capita income is $33,945. Since a large athletic department like Alabama’s is financially independent of the school it is associated with, the taxpayers and students of Alabama are not directly footing this salary, but it’s still a sobering figure. That independence is not the case across the board either, so at smaller schools like my alma mater Bowling Green, shortfalls in ticket and TV revenue are covered by the university’s general fund.

It’s impossible for me to watch a college football game without these negative facts swirling through my brain. Even then, I still react positively to the thrill of the game and the sense of pride I feel when I see the iconic winged helmets of the Wolverines. More than any other hobby or fascination of mine, college football reminds me of Walk Whitman’s “Song of Myself” where he writes “Do I contradict myself? Very well then I contradict myself, (I am large, I contain multitudes.)” I find it easy to read that dictum as applying not just to Whitman, but to both the American character in general. Intertwined in all the right and wrong ways with that character, college football is an essential and utterly American festival. It is a sport as large, complicated, and entrancing as the nation itself.