I am not a fan of surrealism or excessive flights of fancy in art: when confronted with Salvador Dali or Hieronymous Bosch’s mind-warping visions of the unimaginable, my flesh feels like it is creeping off my skin and my eyes avert themselves. The one exception to my distaste for surrealism is Rene Magritte, whose paintings, photographs, handwritten essays, and the productions of his ad agency in Brussels, is currently on display at the Art Institute of Chicago in their special exhibition Magritte: The Mystery of the Ordinary 1926-1938, which runs through October 13.

Magritte also delved into the depths of the fantastic and uncanny. In a famous 1938 lecture, which the Art Institute quotes in the exhibition anteroom, he states that his goal was “to show everyday objects in situations in which we never encounter them…to disrupt the order in which one habitually sees objects…to make them shriek aloud.”

Certainly most of his art fulfills this theme, from the classic juxtapositions of words and pictures to the intermingling of cup-and-ball games, from intricately cut paper designs to other manmade objects within the living world, most spectacularly in his giant canvas The Annunciation. But in merging the real and the artificial, Magritte never lost sight of humanity, never ignored or disavowed the conscious mind. His art was playful, a game for our intellectual expectations and a tribute to our capacity to imagine worlds where the order of things breaks its habits, while always respecting the human body and soul. Three paintings, for me, particularly exemplify the humanity of Magritte. Attempting the Impossible from 1928, depicts the artist and his wife Georgette. Magritte is painting Georgette’s body, nude and posed in the manner of classical statuary, into existence. In this moment he’s all finished except for the left arm and hand. This is impossible in the sense that Magritte is trying to recreate something impossible, a living individual human. But all art at its core is an act of creation, of brining to life the ideas within ourselves, and what lives more strongly in us than our desires for something or someone ideal?

Such an impossibility is worth the attempt. The painting takes on an additional resonance when one sees the photographs at the exhibition’s end, including one of Magritte and Georgette (who were married for 45 years) working on the painting in his studio, the love and collaborative spirit between them all too clear.

On a similar but more troublesome note, The Rape, painted in 1935, still feels timely and tragic. Magritte depicts a woman’s head with her torso taking the place of her face. The image is provocative, to be sure, but far beyond that I see a true definition of what rape is and how it is viewed by a society still reluctant to give women’s stories credence and support. By placing the genital region where the mouth should be, Magritte points out that both the body and the voice, the vehicles by which we express ourselves and what we know to be true, are violated, that rape obliterates every part of you, both physically and emotionally. 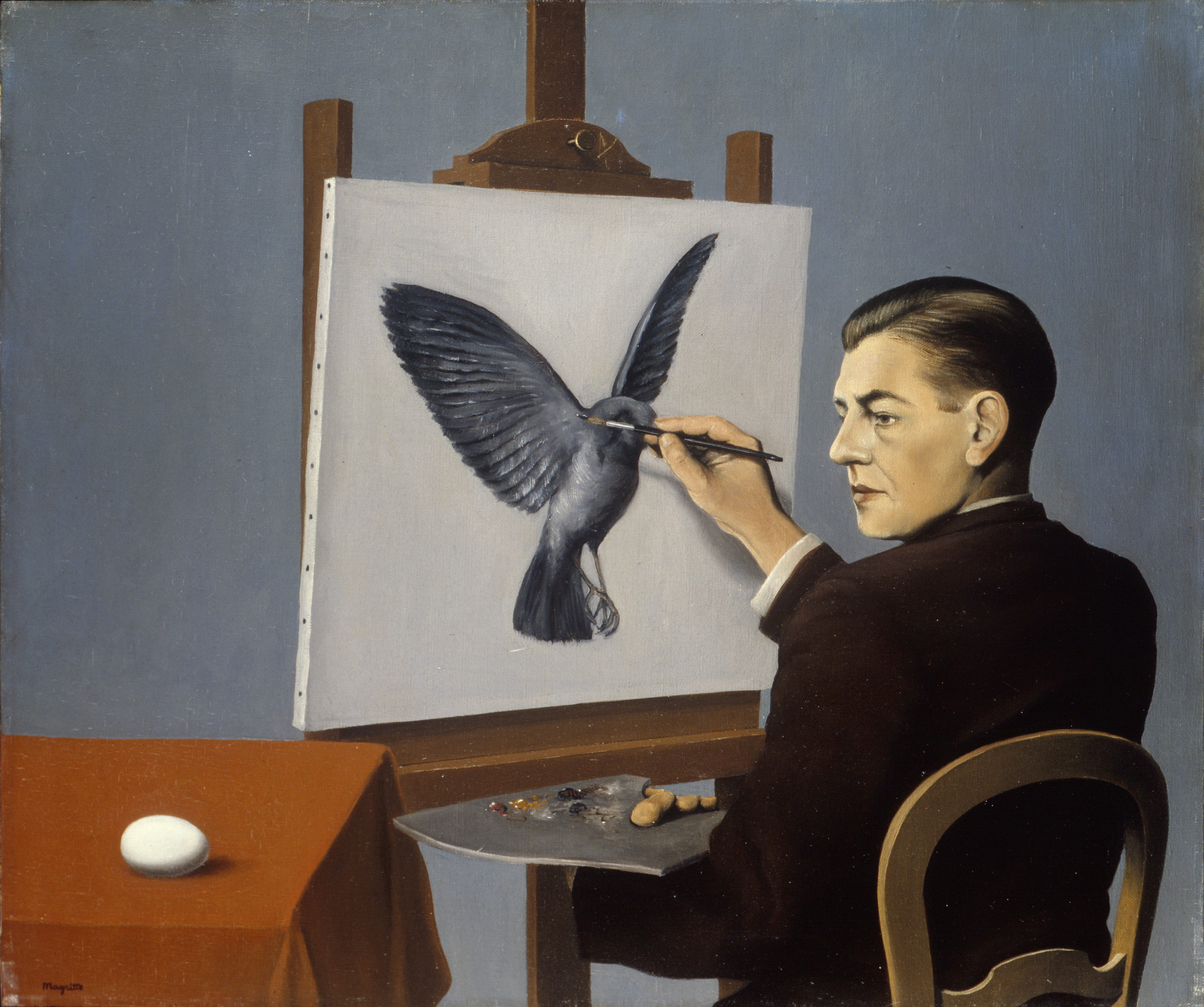 The last painting at specially affected me was Clairvoyance (Self-Portrait) from 1936. If The Rape is an expression of humanity at its worst, Clairvoyance is us at our best. Magritte paints himself in his studio, working on a beautiful canvas of a majestic bird in flight while looking at an egg on a table. Clairvoyance is a reminder of our capacity to see great things come from small beginnings, to know that this progression is possible, and not to give up on trying to shepherd greatness along.

The rest of the exhibition is just as fascinating. Because it stops at 1938, some of his most famous works are not included, but proudly on display are some paintings we have seen reproduced over and over again but cannot tire of seeing in person. This list includes The Treachery of Images (pictured above and aka “THIS IS NOT A PIPE!”), The Human Condition (below; how Magritte gets the canvas and easel at precisely the right angles to lend the air of unreality to the scene is a talent beyond my understanding), Time Transfixed , in which a train rockets through the chimney, and On the Threshold of Liberty , in which a cannon fires at a window whose separate panes depict wildly unalike scenes. Moreover, On the Threshold of Liberty is now displayed the way Magritte intended, between The Red Model, in which a cracked leather pair of shoes metamorphose into human toes, and Youth Illustrated, in which all the flittering thoughts of a young man’s subconscious—bicycles, lions, nude female bodies, pool tables—march down an infinite path on a bright sunny hill.

The paintings are all displayed in one of the Art Institute’s finest layouts ever for the exhibition hall. Every separate gallery is shrouded in darkness, with bright spotlights only shining on each painting or display case. There is nothing else to look at and you are forced to confront the unordinary spectacle of Magritte.

It’s a confrontation worth having, and readers should definitely pay a visit to the Institute in the next three months. Rene Magritte may have specialized in dream logic, but he always tied it back to our electron-shooting minds and beating hearts. He reveals sides of our humanity that we are not always aware of but are as true as the ones we actively live and move in every day. Rene and Georgette attempting the impossible.