It’s a liminal time of year. A young man wakes up on March 18th, bleary-eyed and barely remembering his last two days. He fumbles for his phone, checking texts and e-mail and—

Wow, that’s a lot of messages. Each one seems to implore him to complete something known as the Almighty Bracket. The only messages that don’t require his thoughts on the Bracket are messages telling him what to think about the Bracket. BRACKET. This rite of passage has signaled that spring is merely days away. It’s time for Bracketology. It’s time for the Final Four.

Watch out, corporate sponsors! March Madness is destroying the floor, with gravity and lens flare! RUN! SAVE YOURSELVES, CORPORATE SPONSORS!

Thankfully, the message I bring you today has nothing to do with the hype machine that is the NCAA Men’s Division I Basketball Championship. I’ve never been keen on following college athletics – and don’t get me started on the bullshittery of NCAA’s “amateurism” – so I’ve got nothing to offer on the Madness.

Maybe you’re of a similar mindset. Or maybe you’re really tired of seeing FINAL FOUR plastered over the same bar banners that, only days ago, excoriated us to make other poor life choices – choices that somehow celebrated an Irish saint. Or maybe you’re a sports fan, but aren’t buying the Madness (or that other basketball thing… y’know, that NBA thing). Meanwhile, Major League Baseball is still a few weeks away, and America forgot about the World Baseball Classic (SPOILER ALERT: Dominican Republic won), so… what can one do other than succumb to the Madness?

Well, I’m here to tell you what – you don’t mind if I grab a seat, do you? I’m here to introduce you to a world of ice and vulcanized rubber. If you have not been baptized in the church of the NHL, I would like to offer you a glimpse into what you’ve missed. There’s been sport a-plenty happening on the ice since October erm, since the start of this year. Why succumb to Madness, when you can follow the wisdom of our Lourd and saviour, the Almighty Hockey Puck?

What’s that? Okay, yes, there was that little business of the NHL lockout. Yes, it was ridiculous, and it was the second such stoppage in under a decade. Many writers and pundits wondered what kind of message it would send if the hockey faithful didn’t punish this NHL for this frustrating standoff that cost us half a season. 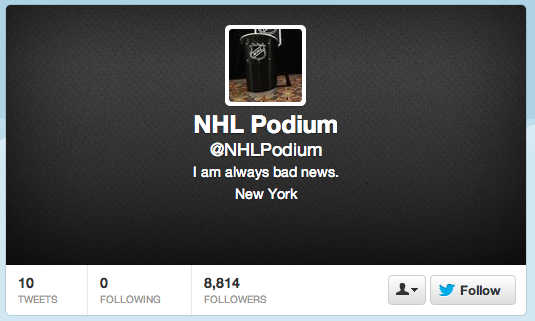 And started the legend of the NHL Podium, long may it reign.

Then again, how were the NFL and NBA ‘punished’ by fans for their lockouts?

{Crickets are heard in the distance.}

The NHL is seeing almost no fall-off in fan interest this year, and yes – one wonders what the league could’ve done with a full season. I come today not to praise NHL commissioner Gary Bettman, but to apologize for reminding everyone of his existence, just now. But let’s not pretend that he did anything that different from Stern in the NBA or Goodell in the NFL.

(Which would mean Bud Selig is the most well-liked commissioner in our “Big 4” pro leagues? Oh dear, I’m going to be sick…)

Do you find marathons fun to watch? What if, instead of the normal 26.2 miles run over the course of 2-to-6 hours, we made it a half-marathon? Yeah, and you only had ONE HOUR to run the entire thing? And the pace car was actually a snow plow instead, so that anyone who fell off this impossible pace was just caught in the plow and pushed along until they stumbled back to their feet? Wouldn’t that be awesome to watch?!

This year’s NHL season is a bit like that. Which is why the season’s biggest story (so far) was even more impressive: believe, my friend, for the Chicago Blackhawks came to testify at the pulpit of not losing (in regulation).

How in the name of Tony Esposito did the Blackhawks put together such a ridiculous streak?

The lockout-shortened NHL season this year is 48 games long. Chicago managed to go the entire first half of the season, gaining a point in the standings with every freakin’ game. That’s 24 games, in all, without a regulation loss. Yeesh.

(What’s with the fine print about “regulation loss?” Well, my non-hockey-watching friend, hockey standings are unlike other U.S. sports. You know how some sports base their standings on points? And those sports usually award something like, 2 points for a win, 1 point for a tie? Same idea here, except that the NHL decided that tie games were downers. Thus, if a regular-season game is tied at the end of regulation, there’s a 5-minute overtime period where each team is down a skater. If it’s still tied, screw it — we’re going to a shootout until someone wins. Since this is basically a coin flip, the team that got the overtime loss – OTL – still gets the 1 point in the standings. This is known derisively in some NHL fan circles as the ‘charity point.’)

The Blackhawks’ streak was a fun ride, and forced mainstream sports broadcasters to pay slightly more attention to the NHL. Naturally, they became fixated upon the streak at the expense of all other hockey. Sports Illustrated may have written something about Chicago “saving” the NHL’s season (see – this whole ‘religious allusion’ set-up has precedent). But at least we got a few more minutes or pages of hockey into the collective sports discussion, right? Right. Preach on.

Chicago was able to do this because its depth in every aspect of the game allowed it to better handle the chaos and fatigue of this condensed season. Offense, defense, special teams, goaltending – even the backups, or the guys who are just meant to eat up ice time, have been better than many other teams’ starters.

But the Blackhawks rarely blew out opponents, instead usually grinding their way to wins. This makes the streak more like a no-hitter in baseball – yeah, the pitcher needs to be good, but he needs some luck for it all to work out. Up until Patrick Sharp left during the last game of the streak, the Blackhawks’ injuries were relatively minor, and easily manageable.

As if to prove the point, Chicago ended the streak by losing two games in a row. And both losses were to teams in the bottom third of the standings. And both opponents scored a lot of goals in each game. It was painful. Thankfully (since this is a Chicago-centric blog), the ‘Hawks limited the losing streak to only two games. Anyway, sorry about dropping into semi-serious analyst tone for those last few paragraphs. Couldn’t help myself. Hockey does that to ya.

WTF in the West

Though Chicago’s streak got all the attention, this shortened season has provided a lot of head-scratching results erm, unexpected miracles. For example, one would think that, after an historic run by Chicago in the first half of the season, the Blackhawks are a shoe-in for the Presidents’ Trophy (awarded to the NHL team with the best regular-season record). The mind-boggling reality is that it’s very possible Chicago won’t even finish the season as the best team in its conference, much less the league. And it’s all because of the Ducks.

Yes, the Anaheim Ducks, that formerly-Disney-inspired NHL team, has come out of nowhere to keep pace with the league-leading Blackhawks. When I say out of nowhere, here’s what I mean: I don’t recall seeing any predictions that picked the Ducks to finish anywhere other than the bottom of their division. Damn near every pre-season prognosticator was similar: “We’re super-stoked that we’ll get to see Teemu Selänne (NHL’s Nicest Guy™) for one more year, but it’s too bad his team won’t amount to a hill of beans in the Pacific.”

With most of the season behind them, Teemu & the Ducks are contending for the Presidents’. Also, I think “Teemu & the Ducks” would make a great name for a ‘60s-style rock band. Also, his milk will help you grow up big & strong:

Meanwhile, the Ducks’ arch-nemeses, the champion Los Angeles Kings, have finally pulled themselves up from the faceplant they took early this season. To the north, the Vancouver Canucks, last year’s Presidents’ Trophy winner, have lost the lead in the weakest division in the West to the Minnesota Wild (even if briefly). Minnesota’s owner was infamous this offseason for signing two all-stars (Zach Parise and Ryan Suter) to ridiculously massive contracts… and then ensuring the NHL changed the rules so that he could never do it again.

Oh, one other hockey miracle for consideration: Do you know who has the longest active point streak now that the Blackhawks have lost? The Columbus Blue Jackets. Do you know of the Blue Jackets, friend? They, who have lingered at the bottom of the NHL standings since their inception in 2000. They, who traded their franchise player last season. They, who are the perennial NHL whipping boys.

But hockey is an equitable sport, my friend. Do not forget that the meek shall inherit the Stanley Cup (or, at least, a potential 8th seed in the playoffs), and there are few teams with a meeker team history than the Blue Jackets. The Beatitude of Parity is in full display in this chaotic, shortened season, and the Blue Jackets and Ducks are the exemplars of this Truth.

Seriously: build a time machine and go back to the end of 2012. Find an NHL fan, and tell him the lockout will be over soon. Once he finishes cheering, tell him that, with less than 20 games left, the Ducks and Wild would lead their divisions, and that Columbus would be in the playoff hunt. Then tell him to stop punching you, and that, no, you are not making fun of him. (You probably shouldn’t have told him while he was in a bar, watching ESPN try to “broadcast” KHL games during the lockout. Sorry, should’ve warned you.)

So, are you ready to accept the NHL into your life and fandom? Yes? Maybe?

What? What about the big markets in New York, Boston, and such? What about this “Sidley Cosby” you keep hearing about? Why do the teams I talk about play games so late into the night?

Ah, I see. Your fandom leans toward the East. Okay, fine, that’s cool. Give me a second to re-calibrate and re-deliver this Divine Message for the Eastern Time Zone.

And by “a second,” I mean a day. Stop by tomorrow for the Eastern version of this holy recap.