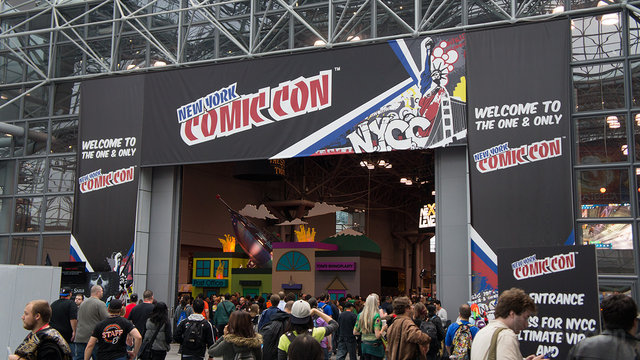 Last weekend, for the third year in a row, I settled down in my friends Adam and Lexie’s guest room and took in New York Comic-Con at the Javits Convention Center on 34th Street. I learned a lot of things this trip, including that NYCC is rapidly turning into the junior SDCC, which is both excellent (more fans and exposure) and lame (nobody can move, and the amount of harassment and unwanted attention regarding female guests has gone up). That half of the people I know now can and will get sick before and during the con as opposed to after. That walking the entire floor in one day will make you feel drunk despite not having had a drop stronger than coffee, but a bowl of real ramen will awaken the soul. That every kind of pizza you can get there is fantastic. That people love to cosplay as Hunter S. Thompson now.

That I don’t know quite as much about the 1970s as I think I do…so next time I audition for Millionaire it’s going to be the general program, and believe me I will because I don’t like to lose. That when a restaurant abbreviates “Angel Hair Pasta with Turkey Meatballs” to “Angel Meat” on the receipt, it’s too darn funny. That the Carlton Hotel’s martini (Beefeater with three olives) and 14 year-old single malt Oban are pure ambrosia. (J., back me up on this.)That my friends, old and new, from New York artists in gentrified neighborhoods to number-one New York Times bestsellers, just keep getting more awesome. That I am more lucky than ever to have Kate Kasenow as my artistic partner. And that there are few honors more great, more soul-stirring, more convincing that you found your true vocation, than when a book you wrote is singled out as a book teachers should introduce to their classes—as I found out from someone who attended the Teaching the Graphic Novel panel.

I also learned that comics keep getting better and better, at least the comics I read…and believe me, I read a wide variety of comics. In preparation for my travels, I bought several books which I wished to get signed, and picked up even more at the convention itself. What follows are my recommendations in recent comics reading, with a DISCLAIMER: I write for Archaia/Boom! and know many of the creators there personally, so when I praise their books to the skies as I am about to do, I can’t shake the bias totally. But I do ask you to trust me when I say these are incredible comics, and the rapture I go into regarding other comics I’ve read lately from other publishes should back up my claim for disinterestedness.

Disinterestedness to a degree.

Iron, or, The War After

Espionage and suspense have reasserted themselves over the past decade in the comics world, but Vidaurri’s take on the genre is a singular one: a story of resistance, deals, and morality in a postwar world told with genuine emotion, Iron distinguishes itself with a cast comprised entirely of animals and illustrated not in chiaroscuro but in watercolor and pastel, giving the tale a dreamlike quality at odds with the stark reality of the storytelling in a highly effective combination.

The Reason for Dragons

One of the great lessons reinforced by much of my comics reading is that in a single-volume story, the simpler you keep it sometimes makes it better. The Reason for Dragons is one of the most stripped to the bone graphic novels you could ask for, a coming-of-age story with really just three characters—Wendell, a fantasy-loving outcast teenager in 1980s New Jersey, Ted, his gritty, motorcycle-loving stepfather, and Sir Habersham, a man in a knight’s costume who lives in an abandoned Renaissance fairground and is perpetually ready to slay a dragon. In this framework of interaction and surprise, and only 80 pages of space, Northrop creates complex, moving characters, Stokely fills the panels with larger-than-life imagery, and the two together weave real magic into a page-turner full of the unexpected.

This is one of the happiest books I’ve ever read. Mercado’s art is bright, colorful, and full of energy and fun, and moreover packs in so much detail—he creates a glorious alternate reality in just 110 pages—that with every read you notice something brand new in multiple panels. The story of middle-school-aged Chico Bustamante, self-proclaimed hero of the town where underpants were invented, and his quest to ride the giant chicken of Sheriff Cornwallis (who also serves as food-truck runner and schoolteacher) promises to be the first in a series, and one look at the life and times of Chico and his friends, the appropriately named Pigboy, devout Jew and vegetarian Bucky, gorgeous newscaster Alma, and Kim Marie, the blonde cheerleader who’s much more of a Coach Taylor—plus the evil ruffage, the surfing rabbi, the go-kart operation, and the world’s meanest mechanical bull…well, it leaves you wanting a lot more.

Quite possibly my greatest find of the convention. This is the book Marvel keeps aiming to make and DC (who didn’t even have a booth at NYCC…have they sunk that low?) appears to have given up trying to make. Film and TV veterans DeSanto and Cramp brilliantly update Shotaro Ishinomori’s manga for a 21st century audience with a richly layered story of good versus evil, human choice, and redemption, and don’t let the breakneck pacing stop them from making the reader care about the ten-man (well eight men, one woman, and one baby with ESP) team tasked with battling the most fearsome villainy on Earth with their robotic superpowers, while To and Herring draw art which makes the eyes pop wide-open. The final sequences in Moscow are more exciting than any action movie I’ve seen in the past several years, and the quiet moments are filled with graceful line and gorgeous color. I’ve read Cyborg 009 four times in three days. If there’s any justice this will be a series all its own.

Kate Beaton practices the most inspired silliness one could imagine. With stark, textured, inviting black-and-white illustrations, she brings out all the inherent hilarity one can find in world history and literary classics, and in doing so encourages us to laugh at the absurdity of our own existence, for whether she tackles the Middle Ages, the time of Austen and the Brontes, or the ridiculously uneventful (and they like it that way) past of her native Canada, she always manages to show the reader that the foibles of human nature really don’t change that much. Hark! A Vagrant, the hardcover collection of her acclaimed webcomic, is book guaranteed to induce laughter at almost every flip of the page, and has enough variety to bring different chuckling spots to every reader. Beaton has stepped away from the series as of late, but her twitter feed (@beatonna) is full of just as funny little comics on her personal life, and the announcement that she will be writing children’s books for Scholastic is a welcome one—she could take her place as our century’s Jules Feiffer.

He happens to be Kate Beaton’s real-life significant other, and Scott Campbell is every bit as hilarious, while somehow packing even more joy and whimsicality into his work. His main series, The Great Showdowns, is continually updated on the web and has resulted in two hardcover collections, all of which are worth reading and following. Campbell’s recreations of the titanic battles from film and television classics—recreations in which the adversaries all look so happy to be there, even the inanimate objects—are moving (the detail he packs into them could only be produced by someone who truly loves the culture) and thought-provoking (by stripping away the antagonism, Campbell reminds us that these conflicts are fictional creations, as opposed to the serious, consequential conflicts of our existence…although this sounds too deep, but I’d rather take a reminder to fight the good fights his way than other ways). Beyond the Showdowns, Campbell also works his magic in traditional comics for Oni Press, paintings, and children’s books for Simon & Schuster, his latest, an illustrated version of Bob Dylan’s song If Dogs Run Free, being particularly delightful. Finally, Saga was a title which generated intense amounts of hype and then lived up to it. I grabbed my copy of the trade collecting the first six issues after it swept the Harvey Awards, and I regret that neither Vaughan nor Staples attended New York Comic-Con so I could proudly get it signed. The less you know about Saga the better, beyond the basic premise made clear on the cover—a star-crossed husband and wife, each from an opposing side in an intergalactic war, go on the run with their baby. It sounds like traditional space opera, but as my friend Stewart Martin said, Vaughan’s tale takes every trope we expect from years of thrilling to the Lucas and Roddenberry universes and throws them out the biggest damn window you could imagine, well, no, you couldn’t, because he shoots for something new and succeeds. The real comparison for Saga is not science fiction but the classic epics, from Homer to Beowulf to the Edda. Starting very much in medias res and not letting up, Saga swings around every corner of the universe, weaving multiple plot threads into one whole, and filling those threads with characters who aren’t pure-heartedly good or spine-tingling evil. I caught myself feeling genuine empathy and recognition with everyone involved in the proceedings, and it helps that Staples’s art is suitably epic, drawn with loving care and a fascination with everything unusual. The plot twists are unpredictable but plausible, the stakes only ratchet higher, and there’s a character aptly named Lying Cat and the greatest drawing ever of somebody using the bathroom.