The Downtown Sound series on Monday evenings in Millennium Park gives lovers of rock music the chance to hear some of the newest and most innovative sounds, with an old-school veteran or two thrown in for good measure. I have already been privileged to be there for when She & Him and Iron & Wine played outstanding shows, but this past week saw me experience what may have been the best performance to take place there in five years of concert going: Richard Thompson.

Since many of you may be scratching your heads thinking “Who?,” a quick rundown: Richard Thompson was the founding lead guitarist of Fairport Convention, one of the most seminal folk-rock bands of them all. Thompson left Fairport to form a duo with his wife Linda, until they split up while recording and touring behind their final album, Shoot Out the Lights. Since then, Thompson has crafted a solo career of excellent consistency and increasingly legendary status: Rolling Stone alone named him and Linda as one of the twenty greatest duos ever (ahead of Steely Dan AND Daft Punk!), Shoot Out the Lights as one of the ten greatest albums of the 1980s, and above all, one of the fifty greatest guitar players of all time.

It took me a day to come up with the best way to describe Thompson’s guitar work: musical string theory. Playing on a Martin acoustic and a Fender Stratocaster and simultaneously using fingers (for melody) and pick (for rhythm), Thompson seamlessly flows from rock to folk to blues and back again, at one minute crushing riffs worthy of Hendrix and Page, the next strumming an unforgettable chord sequence straight from the British Isles folk traditions, then slowly unfolding a minimalist, lyrical melody. And as one song goes to the next, the listener is conscious of the essential similarities in Thompson’s work despite his genre switching. Like string theory, Thompson’s guitar playing elegantly unifies the spectrum of popular music, and could only be so masterfully done by a man who studied the forms with a grand passion. 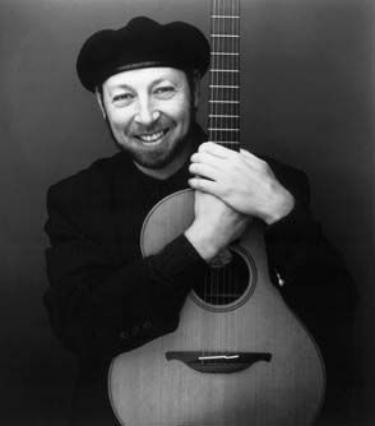 Thompson is touring with his Electric Trio, bassist Taras Prodaniuk and drummer Michael Jerome, with whom he recorded his last album, the outstanding Electric. It is no detriment to Prodaniuk and Jerome that the show’s apex came before they even took the stage, when Thompson played a solo acoustic set of sheer perfection. Opening with the moody pop tune “I Misunderstood,” Thompson then sang “Walking on a Wire,” the first of three tracks from Shoot Out the Lights on the setlist (all of which were written by him but sung by Linda on the album, which makes for a fascinating comparative exercise). “Walking on a Wire” is one of rock’s most sadly beautiful depictions of a doomed relationship, and Thompson’s message, delivered with one voice and six strings sweeping over Millennium’s Great Lawn, was so enthralling as to keep  the audience in the palm of his hand for the rest of the night. He relieved the gloom with “Valerie,” a hilarious rockabilly number that climaxed in the fastest acoustic guitar run I’ve ever heard, the Fairport Convention classic “Genesis Hall” (a poetic denunciation of class division with resounding guitar) and “Johnny’s Far Away,” a number about a musician bedding cruise ship passengers which prompted a group sing-along. Thompson’s playing hit its most otherworldly level on the set’s finale (and Thompson’s most beloved song),  “1952 Vincent Black Lightning,” a star-crossed romance set to quicksilver finger-picking that MIGHT have been even faster than the rapid cascades of notes on “Valerie.” (Last clip actually taken from this show!)

The trio portion which dominated the night was almost a letdown, except the 65 year-old Thompson cranked up the energy to match his electrical boost.

And the band did it in suits and ties…Thompson stuck to black T-shirt, jeans, and beret.

Thompson’s song choices again spanned his whole career, and the highlights included extended pyrotechnical workouts mixed with stirring vocals on “For Shame of Doing Wrong,” “Can’t Win,” “Al Bowlly’s in Heaven,” and “I’ll Never Give It Up,” the latter featuring a remarkable solo by Jerome as he played the entire drum kit with his bare hands. Five songs from Electric were played in almost perfunctory fashion with little room for improvisation and virtuoso cadenzas, although it was impressive how Thompson recreated the haunting “My Enemy” and the driving “Good Things Happen to Bad People” on stage. (I point this song out because the lyrics fascinate me: I cannot tell who Thompson is singing to, or about, or if the subjects are the same, but the song loses none of its power.) More memorable were the other selections from Shoot Out the Lights: “Did She Jump or Was She Pushed?” and “Wall of Death,” which despite its title was a life-affirming number that had people literally dancing in the aisles.

The show ended with “If Love Whispers Your Name,” a song I initially disliked but now realize is a perfect concert-closer, melding a madrigal tune with sage Thompson vocals. Thompson himself did not see it as a perfect concert-closer and brought the band back for the rocking finale “Tear-Stained Letter.” And as he waved goodbye and the roadies began hauling the instruments offstage to prepare for a free screening of Rushmore, a summer shower poured down and drenched the departing audience for five minutes before clearing, as if the Almighty had been checking out Richard Thompson giving a master class in the guitar and wanted to let loose His own seal of approval.

Thompson will not be the last major show of the season by any means. The Downtown Sound will present acts throughout the summer (full schedule here) such as Bob Mould (this week), Maps & Atlases, and The Both, the Ted Leo-Aimee Mann combination which should have some Recorder members drooling in anticipation. (Looking at you, J.)