If you haven’t noticed, we at the Addison Recorder, along with our best friends, have a strong and specific dose of Anglophilia, not for the monarchy and the “let’s boil everything for hours” cooking but for the culture. Doctor Who, Sherlock, Rowling and Tolkien and Gaiman, Hilary Mantel and the other Booker Prize winners, almost everything on the BBC at times, to say nothing of William Shakespeare and Jane Austen…the list goes on and on, and I have observed much as of late that this not a peculiar phenomenon but an ever-growing and ranging one. My coworkers carry TARDIS lunchboxes and local schoolteachers tell me how their students come to class in Premier League jerseys and gear. Americans keep developing a Britannic fix, and this piece offers a good suggestion readily available at any public library to boost your dose.

Apart from the Beatles, the first English cultural artifact I embraced was the classic murder mystery, tales full of dapper suspects and very proper settings and brilliant detectives who always knew more than the authorities. I devoured Sir Arthur Conan Doyle early on and moved on to Agatha Christie through my teenage years. Minor imitations since had left me convinced that none could ever touch Conan Doyle and Christie, but in the past two months, as a lighthearted escape from working on three back-to-back, “serious” works of fantasy and non-fiction, I rocketed through all eleven of the mystery novels written from 1923 to 1937 by Dorothy L. Sayers, featuring Lord Peter Wimsey, decorated soldier and diplomat, expert on fine wines and rare books, and the most ingenious and unstoppable of all sleuths.

One thing I don’t want to argue is that Sayers is the greatest mystery writer of them all…I ultimately enjoyed her tales even more than Conan Doyle and Christie, but to compare them would be like comparing Hemingway and Hardy. Each writer advanced the mystery genre little by little into the publishing cash cow it is today and raised a high bar we should be grateful exists. But if I were to argue on Sayers’s behalf, these are the three main strands of my proposition—which double as why others should give her books a read.

There’s a strand of English humor which pops up from Oscar Wilde to Monty Python but was best exemplified by the grand master P. G. Wodehouse—that of the well-bred but silly-assed man of wealth, a title, usually both who says the most ridiculous things in a straight-laced manner and gets into singular scrapes, all in a world full of servants, large cars, country houses, the intrusion of modern society and a comic reaction against it, and alcohol flowing like rivers to fuel this misadventure, the world of England between the wars. Imagine if Wodehouse wrote detective stories…though Sayers has far more one her mind than Wodehouse did, the comparison is an apt one as it goes. I had toyed with tweeting all of her great one-liners as I read these novels, but soon found I would have had to add 2,000 tweets in a few months. And more importantly, it would have slowed my reading down. As it was, I simply laughed a lot.

(Appropriately, the great English comic actor Ian Carmichael played both Bertie Wooster AND Lord Peter on the BBC in two very acclaimed series in the 60s and 70s.) 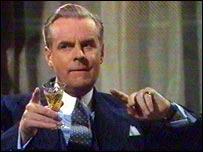 Sherlock Holmes as Conan Doyle wrote him, Hercule Poirot, and Jane Marple were flat—distinguished by one domineering characteristic (razor-sharp logic, arrogance, and deceptive innocence) which informed all their actions, and which never changed over decades of writing. Lord Peter Wimsey, in contrast, is a character decades ahead of his time, and how Sayers handles him is a major reason why, like the great modern television shows, these books need to be read complete and in sequence. In the first half of Whose Body?, the initial Wimsey case, he comes across as any other gentleman detective outwitting the cops, albeit one with a greater sense of humor, but then Sayers writes a chapter in which the young nobleman, having a sleepless night while puzzling through a difficulty, suffers an attack of PTSD brought on by his commanding an infantry squadron in World War I. The transition from mystery to reverie back to mystery is seamless, and in a flash, Wimsey is weaker, vulnerable, and all too human. Every passing book reveals more and more to Wimsey, at times dismissing the mystery altogether to focus on him: his broken engagement and scores of unsatisfying love affairs, his refreshingly honest back and forth religious attitude (Sayers was a committed Christian humanist but wrote Wimsey as a man of very modern doubts), his devotion to his friends (notably the ever loyal valet Bunter and his eventual brother-in-law Inspector Charles Parker), his need to do as many good deeds as possible while shirking from responsibilities, his cynical but hopeful view of a changing world, and ultimately the secret as to why he solves crimes and why his success tears him apart inside all the same.  Wimsey’s character, and Sayers’s writing, took off to new heights when Sayers introduced his perfect foil in Harriet Vane, a non-self-parodic mystery novelist whose considerable brains and tough, independent demeanor mask a torrent of emotion. Lord Peter’s tumultuous courtship of Harriet across several books is what prompts him to finally grow up and bear his soul to her and us, and his having the same effect on her makes the situation more satisfying. But the great satisfaction comes only when one reads the series as a whole and takes the emotional journey with him. We automatically like Lord Peter Wimsey, but by the stunning final pages of Busman’s Honeymoon, we love him to death.

Sayers was a damn fantastic writer

Now, anyone who undertakes a translation of The Divine Comedy has to have some spark that makes her rise above mediocrity, but Sayers was far, far better than good. In terms of mystery-writing alone, she was a master plotter, working out the most intricate yet plausible variations on classic themes: the case where natural death is really murder (the aptly named Unnatural Death), the case where there’s only a few suspects but all have them have the tightest alibis (Five Red Herrings), the case where suicide is really murder (Have His Carcase), and so on. There were only three out of eleven books where I guessed the killer long before the final chapters.

As a writer, pure and simple, Sayers was a master of picking out just the right descriptive details, defying conventions, and most importantly being ahead of her time. Her initial Lord Peter novels are very much in the traditional Christie vein, but only the second, Clouds of Witness, intrudes on Christie territory with its country house setting and well-to-do suspects, and is also told with much more hilarity and one of her first great action set-pieces as Lord Peter and Bunter go on a foggy moonlit journey across a moor soft enough to swallow men alive. Her fifth novel, Strong Poison, marked a turning point. Not only did it introduce Harriet Vane (whom Wimsey meets while on trial for her life), but it also pushed Sayers’s ambitions, kicking off a five-novel run of nearly flawless works for the genre, avoiding the aristocracy and gentry for unusual settings (a dual fishing/artist commune in Scotland, an advertising agency, a seaside resort for the not really well-to-do, a country parish), impeccable plots, and unusual cruxes for the cases.

For example, Have His Carcase includes a nail-biting cryptographic sequence, The Nine Tailors sees Lord Peter solve a murder AND a jewel heist WHILE helping a young heiress in very modern distress with all the clues coming from his knowledge of church bell ringing techniques, and Five Red Herrings climaxes with thirty of the most exciting pages imaginable as our hero proves the identity of a killer by recreating an elaborate plan involving cars, trains, bicycles, hiding a body, and impersonating a corpse, all with the precision of the best heist movies.

But also, as I mentioned, Sayers’s work was astoundingly forward-looking. She spoke for democratization of society and against Hitler and fascism before these were popular attitudes, and Murder Must Advertise mixes some of her finest characters and a fiendishly brilliant murder with views on advertising, marketing, and public opinion which more than hold water today, scarily enough.

This run ended with 1935’s Gaudy Night which is, in this writer’s opinion, one of the most distinctive books of the 20th century and definitely one of the most underrated. There’s a typically impossible case to solve and Lord Peter is at his most Lord Peterish, but Wimsey is barely in the novel and the mystery takes a back seat to the atmosphere surrounding it, namely, Harriet returning to her alma mater, an all-women’s college at Oxford. When not trying to deduce the identity of a prankster whose work is psychologically destroying everyone one by one, she engages in meaningful dialogue on the importance of education, the nature of marriage and relationships, and the role women need to play in society. It’s a book which passes the Bechdel Test decades before our great Alison was even born, and is so unusual that anyone who cares about British literature, feminist literature, and just GOOD literature needs to read it.

In the wake of Gaudy Night, Sayers must have known she’d hit her apex, for she wrote Busman’s Honeymoon (which opens with the most entertaining chapter of her career describing Lord Peter and Harriet’s nuptials) to round off her hero in full and then sent him off to wedded bliss, children, and a few more secret exploits for the government during World War II.

I wish Dorothy L. Sayers had gone on writing mysteries until she died, but that’s the last part of being a damn fantastic writer—knowing when you need to stop.

And if you want my humble opinion, put this guy in a monocle and the BBC would have a new detective series as massive as Sherlock. I read these books and HEAR Tom Hiddleston speaking Wimsey’s lines.

(DISCLAIMER: Sayers was not perfect. Mainly because she throws several very hard to take references to Jewish people in her writing; similar to Trollope’s portrayal, they are invariably moneylenders who are not to be trusted and worthy of marrying only fortune hunters. Thankfully, these so hard to swallow moments are few and far between, although I could not read them without cringing.)