Hollywood has sucked hard so far in 2014, in ways that have nothing to do with the quality of movies. The best are dying and dying so fast.

In the aftermath of Philip Seymour Hoffman’s death, so eloquently memorialized here by Alex, the number one clip I kept seeing over and over on the Internet was of the Lester Bangs scenes in Almost Famous, the scenes that made Hoffman feel like our cool older brother or uncle. In the same way, Harold Ramis, native of Addisonian territory, graduate of high school in Edgewater, former member of both the Second City and the Chicago Daily News, could truly be seen as a father figure for our generation.

Two examples from my personal life: I got my first pair of glasses just after I turned four years old in 1988 and I’ve worn them ever since. Back then, I had all the action figures and the Ghost Traps AND the firehouse headquarters playset for Ghostbusters. I watched the movie over and over and never missed the Saturday morning cartoon show. And Dr. Egon Spengler–Harold Ramis–was my hero. Venkman and Ray got the laughs, but Egon knew all the science. Egon came up with the plans that worked and kept the team together. Egon wore glasses and it didn’t keep him on the sidelines or make him be treated like a nerd the way all the other characters I saw who wore glasses were treated.

And in my family, every time somebody says the line “I just talked to her last week…she was going to make a pot for me!” we all crack up.

But I need to take this beyond me. All of us who write for The Addison Recorder exercise our purely creative muscles beyond non-fiction in one way or another. Harold Ramis’s work shaped our ideas on how to be entertaining. How to be hilarious. How to tell the truth in an inventive way.

Before 1978, Hollywood made a lot of great comedies. Sophisticated farces with wordplay, Mel Brooksian spoofs, physical extravaganzas a la the Marx Brothers, Woody Allen wordplay, and usually nothing too overtly dirty. Ramis was the guiding light for a new style of film comedy: movies which had nominal plots that were mostly excuses for shenanigans to happen around a particular theme. Movies that blended all the aforementioned subgenres together. And movies where the characters weren’t caricatures but people who talked, swore, ate, drank, loved, and looked like the audience paying to see them. Characters who were relatable, who felt real even in the midst of the wackiness.

Between 1978 and 1984 Harold Ramis co-wrote the screenplays for the following films: National Lampoon’s Animal House. Meatballs. Caddyshack (which he also directed). Stripes. National Lampoon’s Vacation (directing again). And of course, Ghostbusters. These are the films that made Belushi, Murray, Aykroyd, Chase, Dangerfield household or stratospheric names. They gave us toga parties and “I’m Alright” and the greatest Huey Lewis rip-off ever. But forget that for a moment. Try to name one comedy, at least one American comedy, in the past thirty years that doesn’t have a tinge of one of these films in it. It’s nigh impossible.

And there’s something else about these movies. They have–spoiler alert!–happy endings, but the central figures are the Cinderellas Carl Spackler imagines himself to be, people whose odds of failure always equalled or surpassed their odds of success. College students, middle-class families, ignored scientists, people with nothing particularly special about them, who weren’t rich or powerful or good-looking. Ramis told The Believer in 2006 that as young man, before getting involved in the Second City, he worked at his family’s north side grocery store and a mental ward. He was drawn to films about injustice that filled him with righteous indignation. Ramis knew about life and the way things usually work out. He gave his protagonists the chance to triumph, but he always presented them with every wart and hardship in place.

No filmmaker, especially in comedy it seems, has a perfect record, and Ramis’s flops tallied up nearly as much as his hits after the golden run that finished with Ghostbusters. (Club Paradise? Caddyshack II? Stuart Saves His Family? And the film that now sadly finished his career, Year One?) But even post-1984 he had a career any of us still would have envied. Back to School and Analyze This were crowd-pleasing blockbusters, and of course, he co-wrote and directed Groundhog Day, which pretty much everyone who’s seen it would tell you is one of the most perfect comedies ever made. Paragraph STOP.

In 2007, Ramis had his true valediction before Year One…playing Seth Rogen’s wise, straight-talking father in Knocked Up, written and directed by Judd Apatow, whose school has carried on Ramis’s legacy more than anyone. At one point, a despondent Rogen seeks out Ramis when things with Katharine Heigl are on the rocks, and Ramis tells him “Life doesn’t care about your vision. You just gotta roll with it.” It’s a line that could be said of any of Ramis’s characters, people whose dreams take detours and weird paths but who roll with it and find something wonderful at the end. Whatever Harold Ramis’s ultimate vision was, his four decades rolling with it gave us so much to love and treasure. 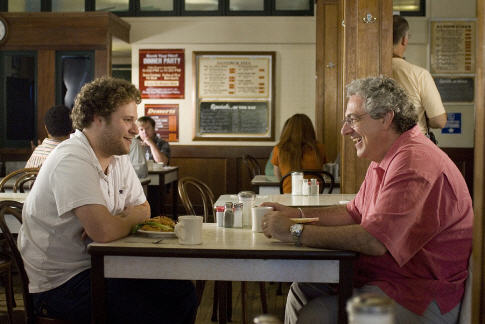 And in the end, I would think, no, I believe, that Ramis, a man who once described himself as “the guy most likely to say ‘fuck’ at the dinner party,” got a giant kick out of how he passed away at age 69.